Anu returns home from her business trip. Vanraj waiting for her near door remembers her leaving home in a sari and returning in a shwalwar kameez. She silently walks in. Nandini asks how was temple darshan. Vanraj says not darshan, she should ask how was her raas leela/romance. Anu angrily shouts Mr. Shah. Baa shouts back at Anu. Samar and Prachi request them not to shout at mummy. Vanraj warns them not to interfere and says he will not listen to Anu’s explanation.


Anu says she is tired of explanation and explains whole incident. Baa asks why is her clothes changed. Anu says its that boy’s mother’s clothes and she needs to return them, Anuj got high fever last night. Vanraj says his body must be burning, so she was comforting him alone in a room at 3 a.m. Anu warns him to behave in front of her daughter and daughter-in-laws. Vanraj asks she shouldn’t say she was not in a room with him. Anu says she was and was taking care of ill Anuj. Kavya shows Anuj and Anu’s dancing video with youngsters. Baa yells if she is not ashamed to lie. Anu says she is not and there must be video of Anuj stumbling and falling down after that. Vanraj asks if his children’s mother is not ashamed of falling in everyone’s eyes. She asks if her children’s father falling in her eyes, he stooped too low and showed his cheapness. Baa says when she has entered a black room, her clothes would have smeared black. Anu says one whose intentions are clean cannot smear their clothes black. 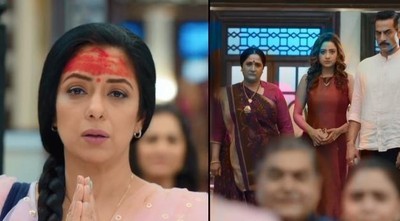 Anuj in his house gets concerned for Anu and tells GK that a house where issues are created unnecessarily will create a big drama, Anu has to give agni pariksha again and he feels something wrong will happen this time. Back at Shah house, Anu asks Vanraj to let it go. Vanraj says why should he when she is not. Baa asks what is going on between her and Anuj. Anu asks why is she asking when she doesn’t want to trust her, she told her 100 times that she and Anuj are just friends, but Baa wants to continue questioning until she hears what she wants so. Vanraj asks to speak to her.

Anu says she doesn’t want to talk to him, even she will tell him one last time that she and Anuj are only friends, he can believe her or go to hell. She then starts crying vigorously. Vanraj asks not to cry after doing heinous act. Baa continues calling her characterless. Samar asks when she didn’t for 26 years, then why now. Baa says Anu’s character has changed seeing Anuj’s wealth. Anu says she feels she was staying with strangers for 26 years.

Mamaji warns Baa to stop her cheap talks in jijaji’s absence, she may apply perfume for a pleasant smell, but Anu’s character spreads pleasant smell. Baa warns him to shut up. Kavya starts next. Anu warns her to shut up. Vanraj shouts she has to respect Baa. Anu says enough of giving respect, they are questioning her character after doing so much for them, enough now and this is her last tears. Vanraj says she has to cry until she gives agni pariksha. Anu asks who is he to seek agni pariksha as its given to Ram and not Ravan. Baa shouts Anupamaaaa.

Anu signals her hand to stop and says even a stone breaks down with continuous hammering, she is a human though; she was afraid that a day will come when she will say she cannot tolerate anymore, today is that day; Draupadi was humiliated in a sabha, she was humiliated in front of her children; this house will not be same after so much happened, so she will leave this house. Kavya says she got a chance to shift with Anuj, shall she call Anuj to pick her up, will they have marriage first or honeymoon like they already did, etc. Anu says Kavya slept with a married man in this house on her bed already and is questioning her. She tells Baa that she should have questioned her son and bahu who did all that in real.

Toshu tries to support Vanraj. Anu warns him to shut up or else she will slap him and he will fall in his pent house, now its time to leave this house with whatever precious this house has. Kavya says she will not get any jewelry or money. Anu says one who thinks jewelry and money is precious is the most poor person on earth, she will take away her self-respect and devotion.

Spider-Man No Way Home Free Streaming online: How to watch